Seven Infosys volunteers from across the country mentored three student cohorts and engaged 12 students interested in pursuing a career in tech. Each team had to develop a working app that improves New Yorkers’ lives. Through this program, students became creators of ground-breaking design and technology and change agents in their communities.

The first team called Earth’s Companions focused on climate change: “We have very little time left, which has caused concern for our generation. It’s preventing many of us from following our dreams,” the students said.

Their app called ‘Planet B’ aims to fight climate change by increasing awareness. The in-built features include “tip of the day,” news and articles related to climate change, daily statistics about carbon levels and rise in sea levels, and a dynamic list of protests and organizations based on location.

The students also identified areas of growth that they can work on in the future: carbon footprint tracker, article of the day, project section, and an option to enable notifications and conduct live streams. They also carried out in-depth market research and competition analysis. 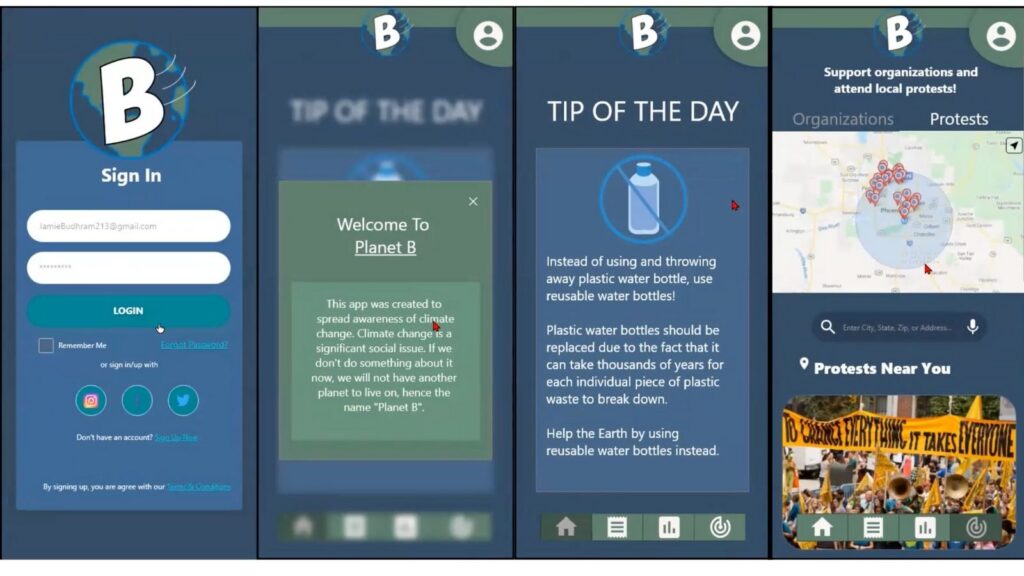 “Earth Hero, Live Green, and UN Climate Change are apps that only provide climate change-related statistics,” Jacky on the team said. “Usually, users go through at least five different apps to get the all the information we mentioned. That’s about to change because our app will be the first in the market to have all the features in one place.”

At the end of their presentation, Earth’s Companions also shared reflections and what they learned throughout the process.

“In the beginning, my group was all over the place. We would do all our assignments last minute. But, after our mentor had an informative talk with us, we realized that we have to manage our time better. And that’s exactly what we did,” Jacky said.

The second team aptly called themselves Danger Waivers. Their team’s mission was to preserve wildlife, protect endangered animal species and save wildlife habitats. “Addressing this issue is important because our team aims to save vulnerable animals from going extinct,” the students said of their decision to focus on the animal kingdom.

Their educational app called Animal Companions aims to help users learn about the animal world, showcase the wide variety of fauna roaming the planet and add a sense of unity and urgency to the conservation movement. The app’s cartooned format makes it easy for the target market, aged 10-18, to understand the issue.

“We want more people to become aware of their surroundings, as well as the large animal kingdom they neglect and can’t see,” Sindy, from the team, said. 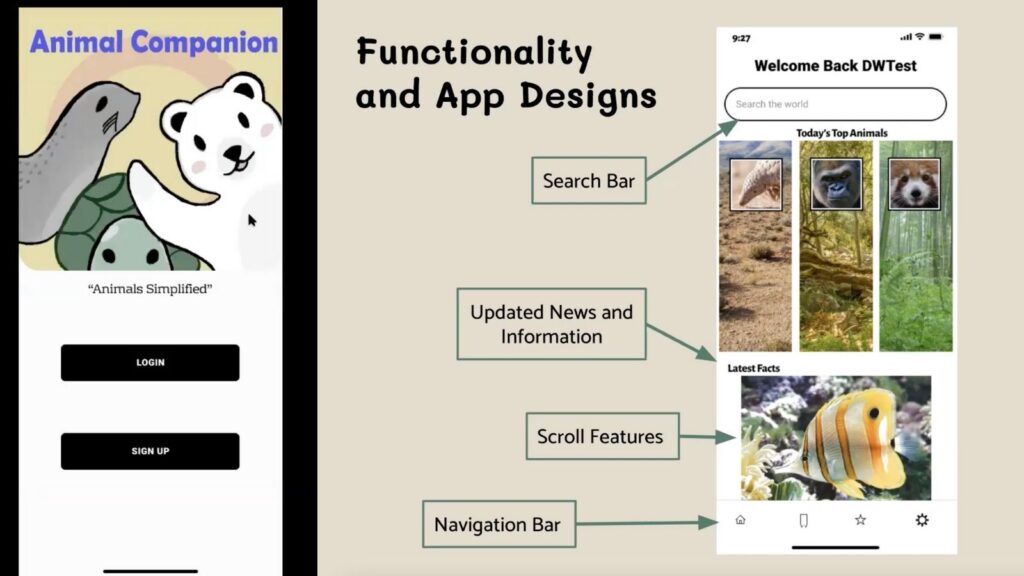 Through participating in the challenge, Danger Waivers said they gained leadership, team building and time management skills. At the end of the presentation, one of the judges, Ramgopal, asked: “Why would kids or young adults choose to download this app over simply doing a quick Google search on animals?”

“We hope that teachers will introduce this app in classrooms,” Bikram from Danger Waivers replied. “It’s more effective than worksheets, and we believe that children are tech-savvy these days and prefer gamified information in apps.”

Leo from the team also spoke about the importance of the app: “There are not many organizations that focus on the issue we chose. The big ones like WWF or National Geographic don’t do a great job in equally representing all animals. They garner support for the most popular animals but weed out the uglier (non well known) ones that go extinct quicker.”

The third and last team to participate in the #InfyAppChallenge challenge this year were The Devz. Their innovative app, Splash Mask, allows users to customize face masks to match their personalities. The team said they hoped to help their communities fight COVID-19 by giving them easy access to masks at an affordable price with delivery perks.

“The entire world has changed lifestyles because of this virus, and it has become the new norm; it is almost impossible to think of a world where we didn’t have COVID-19,” the students said.

Since children and teenagers are not yet required to get vaccinated to go to school and have to continue wearing masks, the team hoped that this app prove to be beneficial. “It’s for people like me who have to wear masks but would rather make a statement while doing so. I don’t want to wear a plain mask; I want to have fun with it.” Nabila from The Devz said.

The team also said that they would like to partner with Snapchat in the future so users can pick their favorite Snapchat filter and use it as a mask design. Users can also follow other users and influencers on the app. 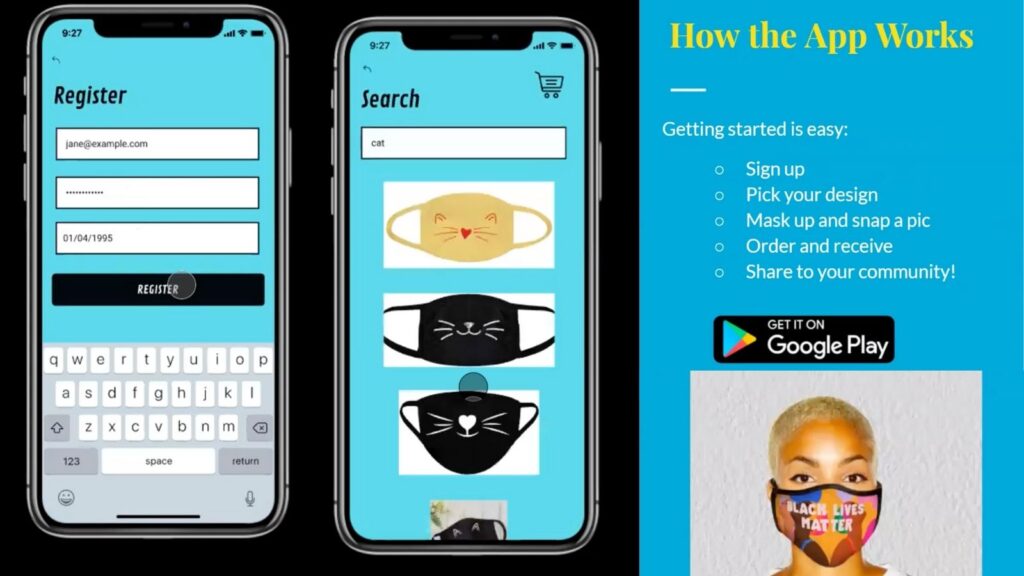 “Why do we have a feature where people can follow each other?” Michelle on the judge panel asked.

“If you want to engage with a user personally or ask for what the inspiration behind their mask design was or just appreciate their creativity, this feature would allow you to do so,” Nabila said.

Through participating in the challenge, The Devz said they learned entrepreneurial skills, app prototyping, team-building skills and “expecting the unexpected.”

At the final presentation held on June 18th, four judges from Infosys chose the best working app and announced the winner: Earth’s Companions.

Infosys Foundation has partnered with Show The Good to feature the students and mentors from the winning team on Infosys’ platforms, allowing them to present their app to non-profit and education leaders, business executives and industry influencers.

In addition, every student who participated in the program will receive a Tech Kit and Infosys Merchandise from Infosys Foundation USA.

We are proud and amazed by the talent of all the students who participated in the program. This program helped students network with industry professionals, learn more about their field and access an unmatched opportunity! Simply put, it helped open eyes, minds, and doors.

Infosys Foundation USA is committed to expanding access to computer science and maker education in K-12 public schools across the U.S. This program is one of the many initiatives that leverage Infosys’ employee network and its mission to offer public school students access to opportunities.

Your Support Helps Us Connect 50,000 Students to Success

Donate to the Campaign